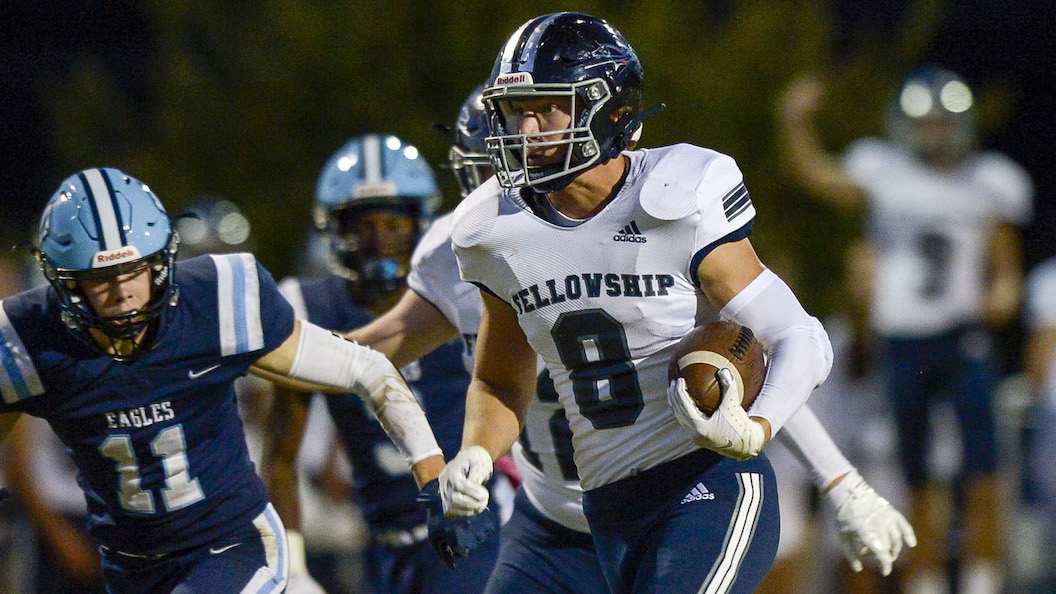 Fellowship Christian running back Josh Cole (8) carries the ball for a touchdown early in the first quarter of his game at North Cobb Christian Friday, October 2, 2020. PHOTO/Daniel Varnado

In the previous 30 years of the Corky Kell Classic, never had two private schools faced off against each other. This year, that streak comes to an end as Fellowship Christian will take on Mount Pisgah Christian at 2:30 in the first of three games in Rome on Friday, Aug. 19.

Fellowship comes into this season with high hopes after narrowly missing a chance at the Class A-Private state championship a year ago. The Paladins find themselves in Class 2A after a huge realignment that shifted a great number of teams to new regions and classifications in the state. Fellowship, coached by Tim McFarlin, in his 42nd year of coaching in Georgia will look to kick the season off with a win against their former region foe.

Mount Pisgah remains in Class A but are no longer labeled with the private moniker after the public/private divisions were dropped. Instead, Pisgah is now a part of Region-6A Division 1. Head coach Ryan Livezey, like coach McFarlin, is in his second season as the head coach at his respective program.

Coach Livezey had a large task on his hands heading into this offseason as he had to find seven opponents to play in the regular season because the division only has three other football-playing schools. A monumental task for any team but especially a private school with a smaller fanbase.

“I had to reach out to about 40 different schools, which will make you pull your hair out,” said Livezey. “Most public schools would not play us, and I get it because they want a team who will bring a lot of fans because they get money through their gate receipts.”

A great opportunity presented itself to add an opponent with the Corky Kell Classic and it was a game that Livezey and McFarlin both agree they couldn’t pass up. While Livezey, the first and most winningest coach at Holy Innocents, has never competed in the Corky Kell, it will be Coach McFarlin’s fourth appearance. As the head coach at Roswell, they appeared three straight times from 2005-2007.

Each team has a total of 18 starters returning and have played each other as a part of the same region for the past 18 years. The last game Mount Pisgah won against Fellowship was in 2017, so this will be the senior’s final opportunity to beat the pesky Paladins. Last year’s result ended with Fellowship beating the Patriots on Saturday morning after a power outage caused the game to be paused at halftime on October 20th.

“It was halftime of a close game, the transformer blew, and the lights went out,” said McFarlin. “We were able to get a couple of scores early on Saturday, but it was a great game. We’re familiar with their kids and they got a lot of guys coming back so they’re gonna be good. I would say they’re one of the best teams in Single A.

The ever-humble McFarlin has a solid team of his own returning. His quarterback, senior Caleb McMickle committed to Houston in late June, and he has a flurry of kids who will play at the next level. Running back Nick Persiano is coming off a 1,000-yard rushing season and didn’t start at the position until the third game. The losses won’t be easy to make up for as senior middle linebacker and defensive signal-caller Josh Cole is off to the Citadel.

“That middle linebacker was one of the best players we saw all season,” said Livezey about the loss a year ago. “We know them, and they know us, and it’s been a long time since we’ve beaten them. We know it’s going to be a challenge to play against them.

Livezey discussed the importance of returning players and noted inexperience is no longer an excuse for the Patriots who went 5-6 last season after a first-round exit at the hands of Athens Academy, 27-21. The biggest loss for the Patriots is tight end/linebacker Cole Spence who approaches his freshman season playing for the Vanderbilt Commodores. Returning after his first season at Pisgah is rising senior quarterback Jack Cendoya who compiled 3,850 total yards and 36 total touchdowns.

Both coaches outlined the importance of competing with teams outside their region and above their classifications to improve the competition they face. Fellowship will face Trinity Christian in week two who capped off an undefeated season with a state championship in Class A-Private and this season are in Class 4A. Pisgah’s first five games are against teams in Class 2A or higher.

Marist appeared in the 1996-97 edition of the Corky Kell and faced off with Thomas County Central. That was the only other time a private school has been included in the event. Friday’s showdown in Rome between the Paladins and Patriots has extra history as both coaches played high school football in Georgia prior to the creation of the Corky Kell Classic. Coach McFarlin was a quarterback for Milton High School in the late 1970’s and coach Livezey was a defensive end/offensive tackle for Norcross in the late 1980’s. It’s truly fitting that Fellowship’s best player is their quarterback and Pisgah’s is rising senior offensive tackle Aaron Kruse who hosts offers from numerous Ivy League programs.

The experience and the talent from both teams will be on full display in what will likely be the hottest (by temperature) game either team will play all season.